World Champion and Olympian Amanda Pelkey is one of Team USA’s greatest players. Currently playing for Calgary’s section of the PWHPA, Pelkey is a rising star amongst the team’s ranks. From a young age, Pelkey nurtured a passion for ice hockey. She would go on to play her summers with the Vermont Stars before discovering the all-girls hockey academy, NAHA. As Pelkey’s desire to take on the big leagues grew, she then took up her blades with the University of Vermont’s Catamounts. Today, Pelkey is taking the sporting world by storm.

The Pyeongchang Games delivered one of Pelkey’s best performances to date. Defeating Canada in an electrifying shootout, the number 37 climbed the podium with her teammates. Pelkey is no stranger to the podium. For two consecutive years, Pelkey claimed the World Championships title at both the Canada and United States events. If that’s not enough, Pelkey also won the 2016 Isobel Cup with the Boston Pride.

Passionate and with a desire to raise up the next generation of ice hockey stars, Pelkey founded AMP Hockey. There she offers high-end skill development, teaches nutrition and healthy eating practices and delivers off-ice training to aspiring athletes. With events happening across the US, Pelkey has become an instrumental voice in the sporting world. Joining ranks with the Scotiabank Hockey Club, Pelkey will continue to deliver high-octane action on the ice. 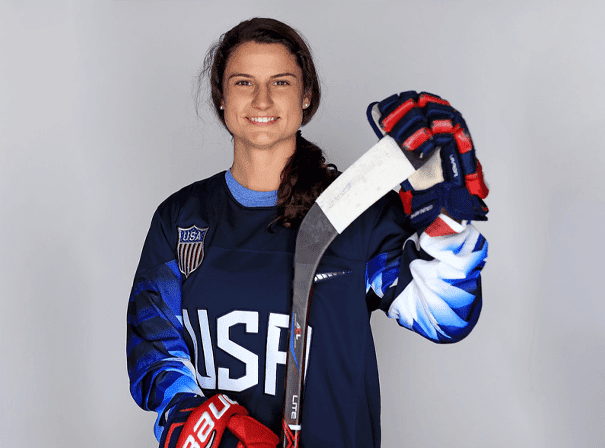