Part of the Indonesian national team, Aries Susanti Rahayu is leading the march in one of the sport’s most thrilling competitions. With a nail-biting career in speed climbing, Rahayu has earned the name “Spiderwoman” for her flawless exploits at the 2019 IFSC Xiamen World Cup. World record smasher and world champion holder, Rahayu is a firm favourite for the Tokyo Olympic Games. Her impressive achievements so far, make Rahayu an athlete to watch.

Scaling a near-vertical 15-metre wall in 6.995 seconds is all it took for Rahayu to claim world record status, and take home the gold. A testament to Rahayu’s performance, she was soon widely talked about in the days and weeks that followed. Millions of people have viewed her mesmerizing ease and grace that propelled her to victory all around the globe. In a world of firsts, speed climbing appeared at the 2018 Asian Games. Rahayu annihilated her rivals and triumphed with the gold in speed and the speed relay competitions.

While most people are hindered by the pandemic sweeping the world, Rahayu pushes on with her intense training at home. Determined to maintain her strength, precision and speed, Rahayu is lifting her social media followers too. Streaming high intensity, strength-building exercises, Rahayu has managed to bring a new wave of attention to the sport. Not only is Rahayu relating to a broken world, but she is also pushing herself to leave her world record in the dust. 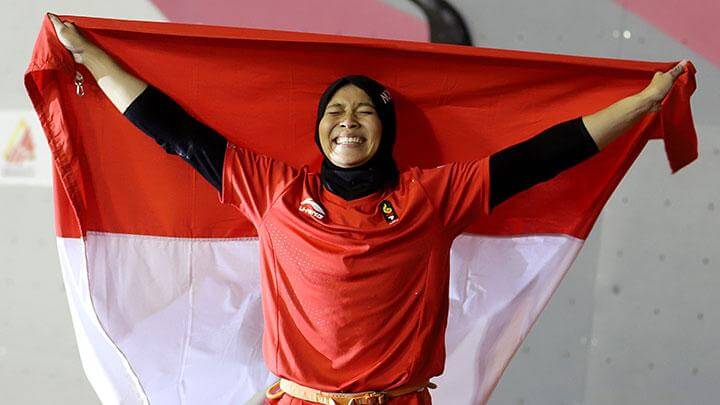