Fatimah Warner – known better by her stage name Noname – is a rapper who has been steadily gaining notoriety for her socially aware lyrics. Soft-spoken but incredibly quick-witted, her down-to-earth, poetic style shows flashes of her inspirations including André 3000 and Lauryn Hill, but she has paved her own path with her unflappable and observant verses on Room 25 and Telefone. The rapper has also spent years sparring on tracks with the likes of Chance The Rapper and Saba on Chicago’s hip-hop scene, and although her stage name suggested a sense of aloof anonymity at the start of her career, the success of Room 25 has revealed a more aware rap star power.

Born and raised in Chicago, Noname first rose to prominence in 2013 when she featured on Chance The Rapper’s mixtape, Acid Rap and Mick Jenkins’ Trees & Truths. Building on her success, the rapper dropped 2016 mixtape Telefone and funded her debut studio album Room 25 from the proceeds in 2018. One of the most critically acclaimed albums of the year, Room 25 was noted for its sharp commentary on identity, race, politics and sex.

After a quieter couple of years where the rapper nearly left the music industry for good, Noname made an impact in 2021 with lead single ‘Rainforest’ from her highly anticipated new album Factory Baby. Despite what her social media handle ‘nonamehiding’ suggests, this incredibly talented rapper isn’t hiding anymore. 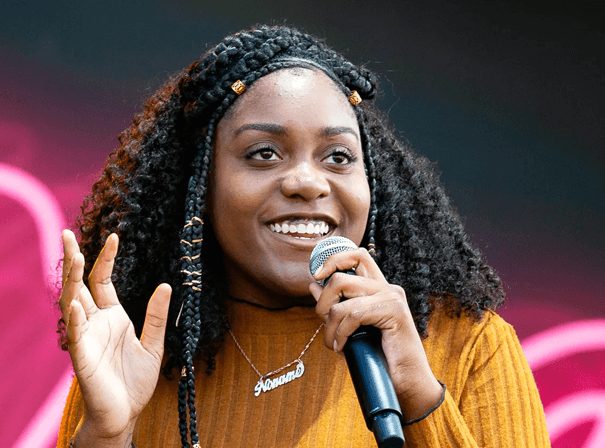