Multi-disciplined World Cup Champion Alfian Muhammed is a powerhouse speed and boulder climber from Indonesia. Leaving the competition in the dust, Muhammed’s strength, precision and sure-footedness are unrivalled. He doesn’t just climb, Muhammed reaches the top of a wall as though he were flying. Along with bouldering and lead climbing, speed climbing’s debut will be at the Tokyo Olympics. Muhammed’s skill on the wall is sure to surpass the extraordinary heights he has already achieved.

With two World Cup Championship titles under his belt, Muhammed knows his way to the podium. Taking the glorious gold title in Chamonix, France, Muhammed’s performance was mind-blowing. With a crowd of 15,000 in the town’s famous square, Muhammed’s effortless climb paid homage to his commitment and perseverance. Never failing to impress, three months prior, Muhammed claimed victory in Chongqing, China. With an impressive winning speed of 5.97 seconds, Muhammed secured his prize. Bursting into 2020 with a bang, Muhammed has set his eyes on pushing beyond his achievements so far.

Fuelled by the impressive crowd support, Muhammed climbs in front of electrifying audiences. Unfaltering under pressure, Muhammed approaches each competition with ease and leaves each event thirsty for more. Muhammed’s speed is mesmerising. Pushing the body beyond its limits, Muhammed naturally overcomes each obstacle and challenge he faces to significant effect. Constant and unyielding, Muhammed’s next race to the top will be a spectacle to watch. 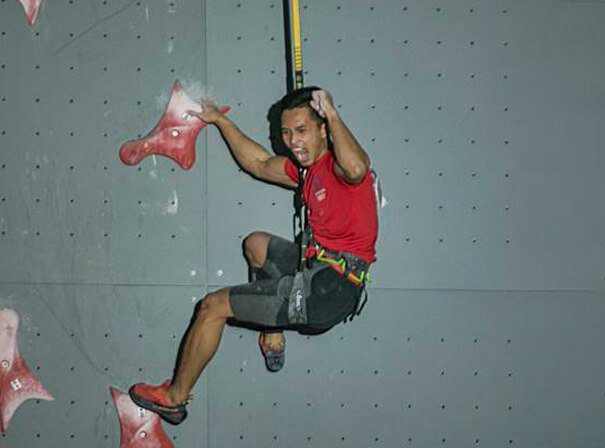