Marc Maron is an American stand-up comedian, podcaster, radio host, writer, and actor. He is perhaps best known as the host of popular podcast WTF with Marc Maron, interviewing comedians, authors, musicians, and celebrities from his garage in the Los Angeles area. Notable guests include Louis C.K. (in an episode named #1 podcast episode of all time by Slate magazine) and then-President of the United States, Barack Obama. The podcast has reached No. 1 on iTunes comedy section numerous times and was listed at #1 on Rolling Stone’s ‘The 20 Best Comedy Podcasts Right Now’. He created and starred in his own television show, Maron, and currently co-stars in the Netflix comedy series, GLOW. In addition, he had a minor role in the record-breaking movie, Joker, and a starring role in the comedy movie Sword of Trust.

Maron initially enjoyed success as a stand-up comedian and is widely regarded as a legend in the community. He was a frequent guest on television shows the Late Show with David Letterman; Tough Crowd with Colin Quinn; and Late Night with Conan O’Brien. He hosted Comedy Central’s Short Attention Span Theater and VH1’s Never Mind the Buzzcocks. He was a regular on radio network Air America, hosting The Marc Maron Show and co-hosting Morning Sedition and Breakroom Live. He has since made television appearances on the likes of The Simpsons; Girls; Louie; and Easy; and landed roles in such films as Frank and Cindy; Respect; and Get a Job.

Maron has authored several books, most notably ‘The Jerusalem Syndrome’, which also ran as an Off-Broadway one-man show. He has produced numerous comedy specials and albums, including ‘Thinky Pain’ and the recent ‘Too Real’. Additionally, Maron has received nominations at both the 8th Critics’ Choice Television Awards and the 24th Screen Actors Guild Awards for his role on GLOW. 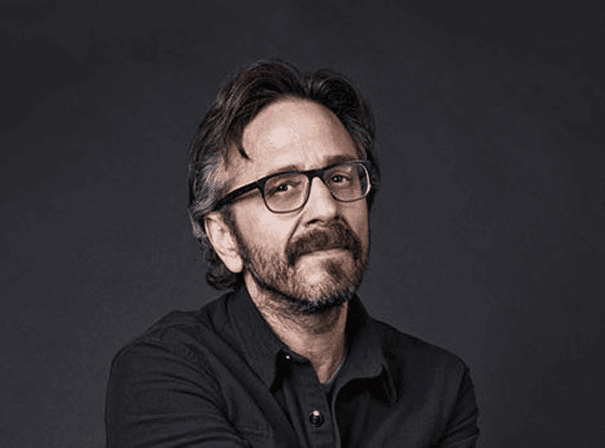