American soccer player, Amber Brooks, is known for playing in the position of a defender for OL Reign in the National Women’s Soccer League. Brooks was born in Evansville in 1991. While in high school, Brooks scored 62 goals and had 30 assists. However, she only played for the first three years and not in her senior year as she suffered a knee injury. She was named first-team All-County and a Parade Magazine All-America as a junior after she led her team to finish the 2008 season undefeated. Brooks was also awarded the 2008 NSCAA Girls’ Scholar Athlete of the Year, and was ranked by ESPN Rise as the number one recruit in the nation in the following year. Brooks was chosen captain of the University of North Carolina Tar Heels women’s soccer team, during her junior and senior year. While playing with the Tar Heels, Brooks received many accolades. She became a two-time NCAA National Champion and won the College Cup twice, in 2009 and 2012. Brooks scored 34 goals and 19 assists during her career while in college. Brooks went on to play with Vancouver Whitecaps in 2011, appearing in five games. She then played with Bayern Munich from 2013 to 2015. With Bayern Munich, Brooks scored two goals in her first Bundesliga game. In 2015, Brooks was traded to Seattle Reign, appearing in twelve of their games and scoring one goal. Brooks also played with Houston Dash from 2015 to 2019. She scored one goal and two assists and was captain eight times. During her time with Houston Dash, Brooks was named Dash Defender of the Year in 2018. Brooks now plays with OL Reign since 2020. 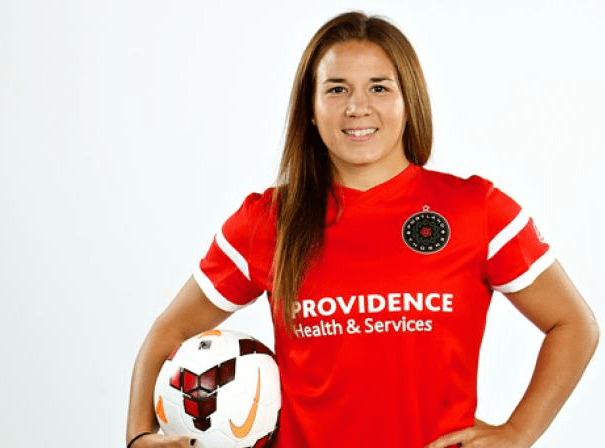