Andrey Yudin is a Russian trampoline gymnast who has competed in numerous World Championships, as well as at the 2016 Olympic Games.

Yudin comes from Togliatti in Russia, a city known for its sporting prowess. He took up trampolining when he was just 7 years old, training for competitions and enjoying a successful junior career. He debuted as a senior in 2014, competing in the World Cup competition in Arosa and taking home his first gold medal at the European Championships in his very first season. The same year saw him compete in his first World Championships too, travelling to the USA for the competition. 2015 was Yudin’s breakthrough year, as he took home two medals at the World Championships in Denmark, with a bronze in the men’s individual and a gold in the men’s team. The athlete then qualified to represent his country at the 2016 Olympic Games in Rio de Janeiro, where he reached the final of the men’s individual competition. Two more major medals followed in 2017, when Yudin came third in the men’s synchro and second in the team trampoline event, with no signs of his career slowing down any time soon. He claimed a medal again in 2018, when he came third in the individual event at the World Championships at his home ground.

With hopes of an Olympic medal at the next Games, Yudin continues to train and compete at major international events. Russia have awarded him the title of Honoured Master of Sport, and he looks set for many more years of success. 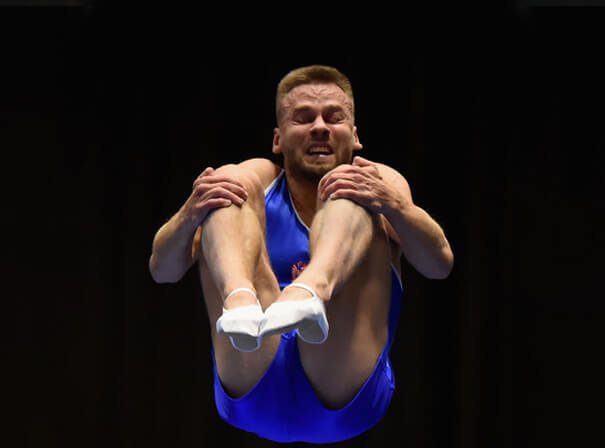