Inspirational Ryan Gibson rose to fame after he turned his prosthetic glass eye into a unique tribute to his beloved football club Bayern Munich. The superfan bravely beat a rare form of cancer and marked the occasion – and his passion for the club – with a glass eye featuring the Bayern Munich crest in place of the pupil and iris. Now famous around the world, Ryan also hosts his own popular YouTube and Facebook show Halftime with Bayern Ryan, which focusses on the motivational and inspirational side of football.

Hailing from York, South Carolina in the USA, navy vet Ryan lost his right eye to ocular melanoma, an extremely rare form of cancer. Throughout his fight his love for Bayern helped him through, and Ryan turned his need for a prosthetic into a glittering opportunity to support two causes close to his heart: promoting his beloved Bayern and also raising awareness of the disease.

Made especially for Ryan by a local ocularist, the prosthetic eye is thought to be the only glass eye with a hand-painted football club logo in the world. Ryan needed permission from the club to use their logo, but Bayern have been helpful throughout the process and he has even met some of his idols from the team including winger Franck Ribery. Ryan’s passion for the team has helped him through some of life’s toughest challenges, and has also made him a world-famous super-fan. 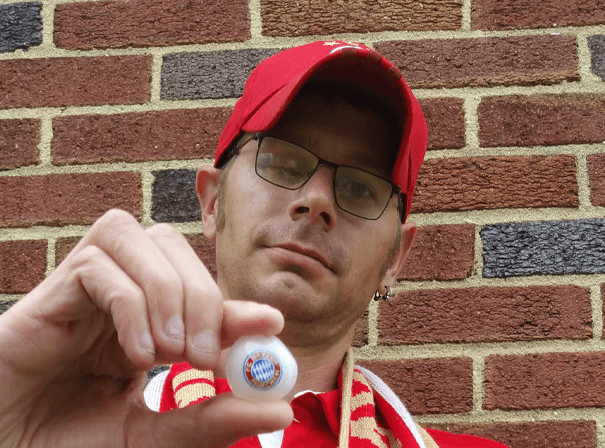