The dedicated Kenyan national made his first appearances on the European Track & Field circuit in 2009, debuting with a personal best of 3:37.39 mins in the 1500m and taking fourth place at the Bislett Games. He was then part of a mixed nations team in a 4 x 1500m relay at the Memorial Van Damme annual athletics event in Brussels, and helped set the fourth fastest time ever for the infrequently contested event. His times improved the more he competed and he earned selection for the 2012 IAAF World Indoor Championships. He regularly competed in the IAAF Diamond League, and was chosen to represent Kenya at the 2013 World Championships in Athletics. He reached the semi-final in the 1500m. Later the same year he came first in 1500m events held in Glasgow, Moscow and Metz. Regularly competing to this day, Birgen has built up more and more victories, including Dusseldorf in 2014 and 2015, the 1500m in the IAAF World Indoor Tours in Torun 2017, Glasgow 2018, Madrid 2019, and in the 3000m in Boston, Karlsruhe and Glasgow in 2020, and Karlsruhe again in 2021.

Birgen regularly posts to his dedicated followers about his life both on and off the track via Twitter and Instagram. 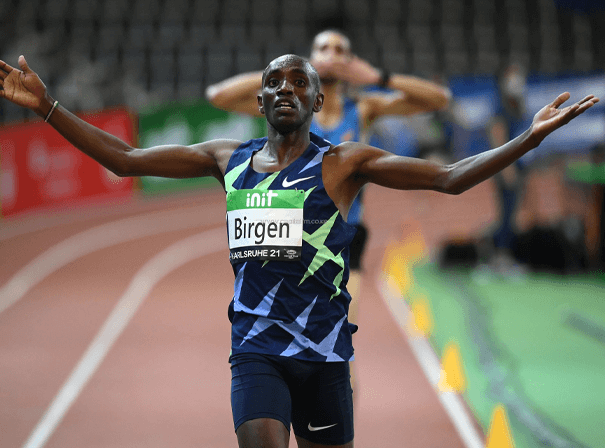