The award-winning American comedian Bill Maher is loved by fans as one of the country’s best-known TV hosts and political commentators.

Maher first rose to fame with his 1993 comedy show Politically Incorrect. Running for five successful years on ABC, the show welcomed an array of guests from politicians to journalists for an evening of lively discussion. The winner of four Cable ACE awards and 18 Emmy nominations, Maher went on to highlight the shows most memorable moments in his book Does Anybody Have a Problem with That? Politically Incorrect’s Greatest Hits. Later in 2003, Maher went on to launch his HBO hit show Real Time with Bill Maher, featuring entertaining panel discussions and interviews with legendary guests including George Clooney, Drew Barrymore and Kevin Costner. The show’s most popular segment New Rules, a roundup of the weeks more important events was later adapted into a book by Maher, New Rules: Polite Musings from a Timid Observer, which enjoyed almost three months as a New York Times bestseller and its audio booked receive a coveted Grammy Award nomination. Of his other projects, Maher has hosted several critically acclaimed HBO specials, his 2008 documentary film Religulous, his special Amazon Fishbowl with Bill Maher and his hilarious political guide, When you ride alone you ride with bin Laden.

A household American name, Maher was ranked 38 on Comedy Central’s list of 100 greatest stand-up comedians of all time in 2005 and in 2010 he went on to receive a Hollywood Walk of Fame star. A passionate animal rights campaign, Maher serves on the board of PETA, as well as Project Reason and NORML in support of cannabis legalisation. 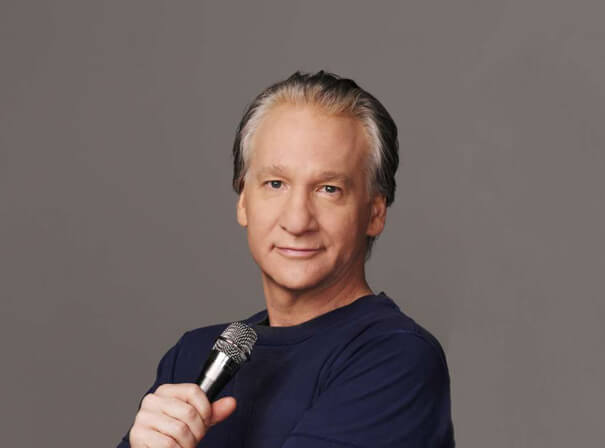