Conner Coffin is the latest edition of surfing style masters to emerge from Santa Barbara. Following closely in the steps of local icons such as Dane Reynolds, Bobby Martinez, and three-time World Champion Tom Curren, his authoritative approach was built in the region’s legendary point breaks that made the stretch of coast famous.
As a child, Coffin’s father’s values of hard work, discipline and service were firmly instilled in him, creating a charismatic personality that is 100% authentic, just like his surfing. His father’s successful business provided Coffin a dreamlike childhood, paving the way for a fruitful surfing career.

Prior to qualifying for the Tour, Coffin worked as a boat driver in Fiji and used to spend a great deal of time at his family’s second home in Hawaii. After travelling the world several times over, hunting for waves, he has gained something of a purist approach to power-based surfing. Coffin has built a strong reputation in high-quality surfing; nonetheless, this did not make qualifying in the meagre conditions on the QS any easier. After nearly throwing the towel in on his efforts in 2015, it was his younger brother, Parker who intervened, and their double-down well and truly paid off. He qualified later that year, instantly landing a successful rookie season with a runner up finish in Portugal and a fifth place at Bells.

Since then, Coffin has continued to excel; finishing the 2018 season at #7 on the Jeep Leaderboard after earning a third place finish at the Quiksilver Pro France. In 2019 he snuck into the top 22, but the accomplished musician has still managed to publish a series of vlogs, release his first studio album, and continue to travel the world surfing and with a huge smile on his face. 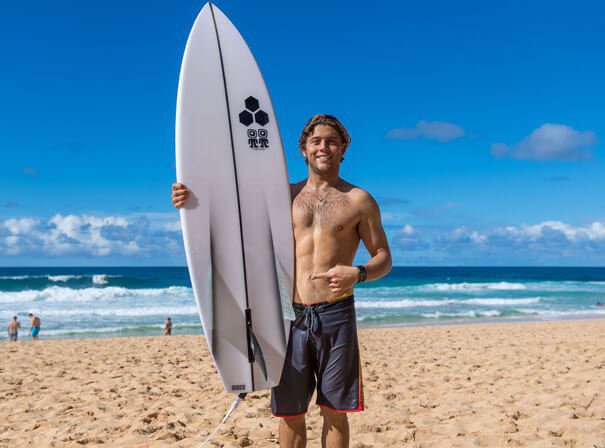