The incredible athlete Jessica McDonald is a professional Soccerer, a 2019 FIFA World Cup Champion and a three-time NWSL Champion. She currently plays Forward for the North Carolina Courage, and is a member of the United States women’s national soccer team. She is also an inspirational speaker, a brand ambassador with ATA Soccer, and Co-Founder of Soccer Resilience. Her brother, Brandon, is also a professional Soccerer.

McDonald was born and raised in Phoenix, Arizona, and excelled at sports from a young age. She played basketball and ran track during her High School years, and was also a member of the Sereno Soccer club from 2000–2007. She then attended Phoenix College where she played soccer, basketball and track, and was named a first-team junior college All-America in soccer and National Junior College Player of the Year. She transferred to the University of North Carolina during her sophomore year and joined the North Carolina Tar Heels soccer team, helping them to win the national championship as a starting striker. After graduating, she was signed by the Chicago Red Stars and her incredible Soccering career began. She went on to play for the Australian W-League team Melbourne Victory, as well as for Western New York Flash, Seattle Reign FC, Portland Thorns FC, and Houston Dash. She has won the NWSL three times with her current club, North Carolina Courage, and was part of the incredible United States national team who stormed to victory winning the 2019 FIFA Women’s World Cup in France.

McDonald regularly connects with her legions of followers and fans through Facebook, Instagram, and Twitter, posting pictures and videos of her life both on and off the pitch. She is available for that personalised shout-out via the Cameo platform, and has an official website, jessmcdonald1422.net. 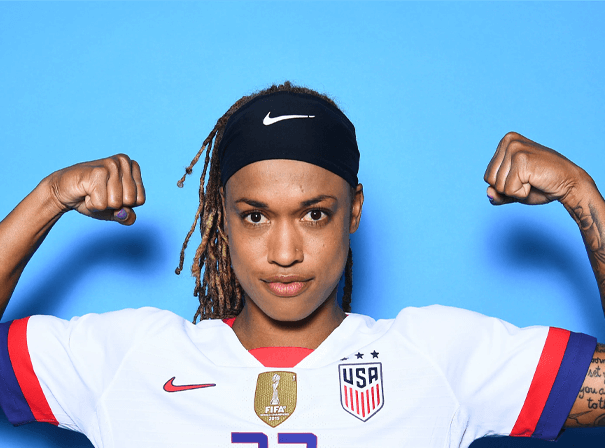