American singer-songwriter Joy Villa has released two EPs and many singles during her 20-year career, but since 2016 she has become increasingly well-known as a vocal supporter of former US President Donald Trump and various right-wing causes, particularly pro-life campaigns. Her views have been reflected in everything from her social media output to her clothing to her music — her singles during recent years have included ‘Make America Great Again!’, ‘The Star-Spangled Banner’, and ‘Freedom (Fight for It)’.

Villa was born in California but grew up in New York. She began working as an actor as a teenager, a career she has kept up over the years with guest appearances in a variety of shows and films including Heroes and CSI. After a handful of singles, she released her first EP, I Make the Static, in 2014. It topped the US alternative and rock charts and made number 12 on the Billboard Charts. At the following year’s Grammy Awards, she wore the first of what have since become trademark statement dresses. Since 2017, the dresses have endorsed either Donald Trump or other right-wing causes. She has also spoken out and/or campaigned against abortion, Black Lives Matter, human rights abuses in China, Joe Biden, and lack of diversity of opinion in Hollywood. She further made her stance clear when she performed at a Stop the Steal rally in Nashville in November 2020.

In an entertainment world that she views as inherently “Leftist”, Villa’s frank views have made her a cause celebre and villain in equal measure, but one thing is certain, she certainly can’t be ignored. 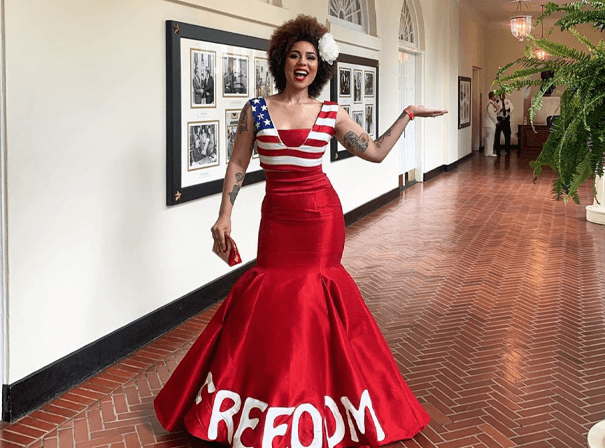