One of most decorated swimmers in US Olympic history, former backstroke swimmer Lenny Krayzelburg is a four-time Olympic gold medallist. Standing at 6ft 2in and possessing a bodybuilder-esque physique and powerful arm strokes, he became known as one of the most physically strong swimmers around. A former world record holder in the 50m, 100m and 200m backstroke, he was chosen as USA Swimmer of the Year in both 1999 and 2000.

Born in Odessa, the Soviet Union (now Ukraine), Krayzelburg was born to Jewish parents. He left for the United States with his family in 1989 and settled in Los Angeles, where he overcame language and financial difficulties with the help of the extensive Russian community in the city. Training at the Jewish Community Center followed by the University of Southern California and Trojan Swim Club, the softly spoken Russian was destined to become the world’s greatest backstroke swimmer, and won three backstroke gold medals at his first major international meet at the 1997 Fukuoka Pan Pacific Games.

The following year he bagged gold medals in the 100m and 200m backstroke at the 1998 Perth World Championship, and in 2000 he became the first Olympic swimmer since 1984 to become champion in both the 100m and 200m backstroke events at the same Olympic Games. Krayzelburg clinched another gold medal at the 1984 Olympics when he led off the 4x100m medley relay, also setting the 100m backstroke world record during the race. In 2004 he was elected captain of the US Olympic Team and won a fourth Olympic gold medal in the 4×100 medley, despite recovering from repeated surgery to his left shoulder.

Since retiring, he has opened the LK Swim Academy and founded his own foundation to help underprivileged children learn to swim. 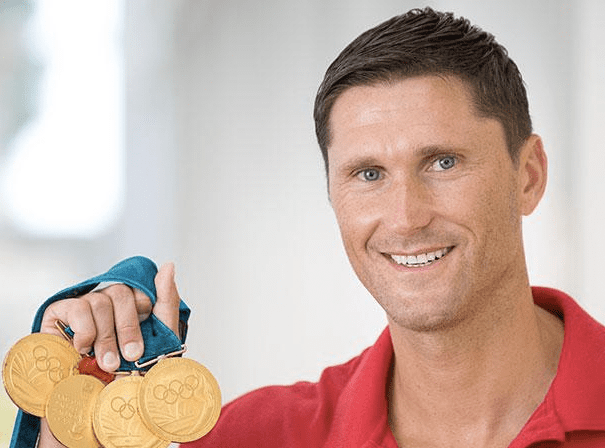