The incredible Melissa Stockwell is a 2 x Paralympian and Bronze medalist, a Triathlon coach, as well as the co-founder of Dare2Tri, a Chicago-based triathlon club for athletes with disabilities. As a war veteran, she was the first female to lose a limb in combat, and is the recipient of the Purple Heart and the Bronze Star. She is also a motivational keynote speaker.

Stockwell was born and raised a patriotic American. She joined the ROTC when she was at the University of Colorado, and was in her senior year when the 9/11 attacks hit. She began Transportation Officer Basic Course training in Virginia soon after, and was deployed to Iraq in 2004. As a First Lieutenant, she was leading a convoy when a roadside bomb took her leg. After being medically retired from the Army in 2005, she worked as a prosthetist and served on the board of directors of the Wounded Warrior Project. Having been a keen able-bodied athlete all her life, Stockwell was not going to let losing a limb change her goals, and she subsequently became the first Iraq war veteran to be chosen to compete in the Paralympics. She competed in three swimming events in the 2008 Paralympics in Beijing, and was the US Team’s flag bearer at the closing ceremony. She was then selected to represent the US in the 2010 ITU Paratriathlon World Championships in Budapest, where she won Gold in the Women’s TRI-2 (above knee amputee) class. She is a multiple US National Paratriathlon Champion in her classification, and was named USAT Paratriathlete of the Year in 2010 and 2011. She won Gold again in 2011 and 2012, Silver in 2013, and Bronze in 2015, and then, at the 2016 Paralympics in Rio, won Bronze in the PT2 category.

Stockwell regularly connects with her legions of followers and fans through Facebook, Twitter, and Instagram, posting pictures and videos of her remarkable personal and professional life around athletics. She is available for that personalised shout-out via the Cameo platform, and has an official website, melissastockwell.com. 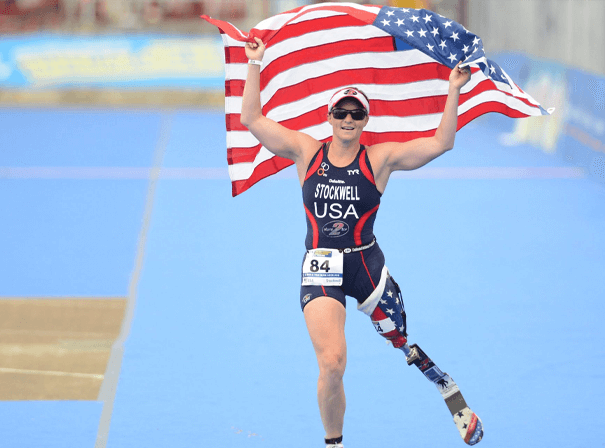