Quadri Aruna is a Nigerian professional table tennis player who recently signed with TTC RhönSprudel Maberzell Fulda in February 2020 to compete in the German Bundesliga. Known for his forehand-oriented playing style, he competed for Nigeria at both the 2012 and 2016 Summer Olympics, the latter of which he re reached the quarterfinals. Perhaps the most remarkable achievement of his career at the world level, Aruna’s arrival to the quarterfinals in the Men’s Singles event at the Olympics came after defeating competitors like Wang Yang, Chuang chih-yuan and Timo Boll before succumbing to Ma Long. He competed alongside Segun Toriola and Bode Abiodun for Team Nigeria in the team event at the same 2016 Olympics in Rio.

Ranked the no. 20 player by the ITTF as of April 2020, Aruna previously received ITTF’s 2014 Star Player of the Year award and the Sportsman of the Year Award at the 2018 Nigerian Sports Awards. Some of his notable accomplishments include reaching the quarterfinals in the men’s singles competition at the 2014 World Cup and winning the men’s singles event at the 2017 ITTF African Cup. He finished in second place at the 2018 African Cup, coming in after his rival Omar Assar, but won Silver at the 2018 Gold Coast Commonwealth Games. An athlete who has worked his way up the ranks over the years, Aruna is sure to make more waves as his career continues. 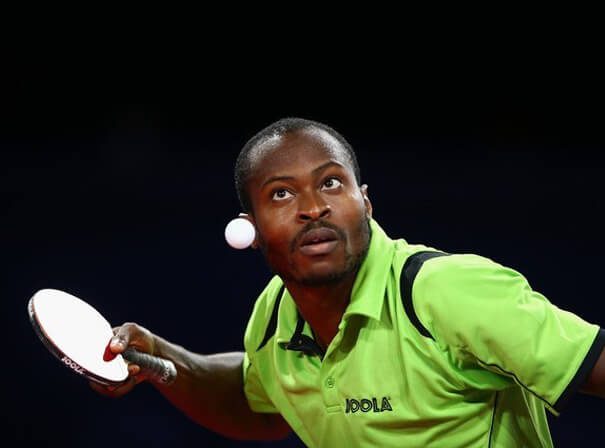