William Tan is a Paralympian, campaigner, multiple world record-breaker, and an Oxford and Harvard-educated physician and neuroscientist.

Whether through his extraordinary feats of endurance, or his distinguished academic and medical career, Tan has again and again proven himself unstoppable. He has received dozens of awards and honours in both Singapore and internationally, including the Outstanding Young Persons of the World Award, Singapore’s Public Service Star Award, and the Singapore Disability Sports Council’s Sportsman of the Year award.

Tan contracted polio at the age of two, which left him paralysed from the waist down. Though he initially faced adversities at school, he soon excelled, attending Singapore’s prestigious Raffles Institution on a Ministry of Education Scholarship. He later attended the National University of Singapore, was a Fulbright Scholar at Harvard, a Chevening Scholar at Oxford, and trained at the USA’s famous Mayo Clinic.

Tan has competed at the World Games, the Paralympic Games and the Commonwealth Games, but it is for his feats of endurance that he is now best known. He has raced in over 60 ultramarathons, climbed a 14-storey building, skydived, sailed, and raised over $18 million for charity through his endeavours. He holds several world records and firsts, including being the first person to complete a marathon in a wheelchair at the North Pole, and the fastest person to complete 7 marathons across 7 continents in 26 days. Despite being diagnosed with Stage 4 leukemia in 2009, Tan has continued to undertake extraordinary challenges, achieving his personal best in a para-cycling marathon the next year. He returned to wheelchair athletics to compete at the South East Asian Games in 2015 at the age of 58, has continued to raise money for medical causes, and has campaigned tirelessly for lower medical costs in Singapore. 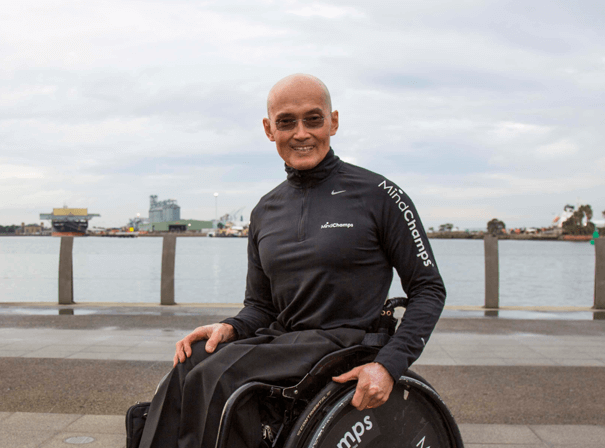