Superb athlete Willie Jefferson III is a professional Football player, who is a 3 x CFL Western Division Allstar, a 2 x CFL Grey Cup Champion, and 2019’s Most Outstanding Defensive Player. He plays for the Winnipeg Blue Bombers in the Canadian Football League.

Born and raised in Beaumont, Texas, Jefferson began playing football at school when he was selected to the 4A all-state second-team in his senior year. He was also selected to the First-team All-District 20-4, and Port Arthur News Super Team. He first attended Baylor University and played college football as a wide receiver, before transferring to Stephen F Austin, where he was named 2011 Southland Conference Newcomer of the Year in his Junior season. He led the Southland Conference in sacks with 16, and was selected to the Sports Network All-America second team, and Phil Steele’s Magazine All-America third team. His professional career kicked-off when he signed with the Houston Texans following the 2013 NFL Draft. He then moved north of the border to join the Edmonton Eskimos in the CFL for two seasons. With a move to the Washington Redskins back in the NFL not working out, he stayed in Canada and signed with the Saskatchewan Roughriders, where he was named a CFL All-Star in 2017, and in 2018 was nominated as the team’s Most Outstanding Player and Most Outstanding Defensive Player. He then moved to the Winnipeg Blue Bombers in 2019, and for the second consecutive year, won the award for both Most Outstanding Player, and Defensive Player for his team, ultimately going on to win the CFL Most Outstanding Defensive Player Award.

Jefferson regularly connects with his thousands of admirers and fans through Instagram, and Facebook, posting pictures and videos of his life on and off the gridiron. He is available for that personalised shout-out via the memmo.me platform, as well as through the Cameo platform. 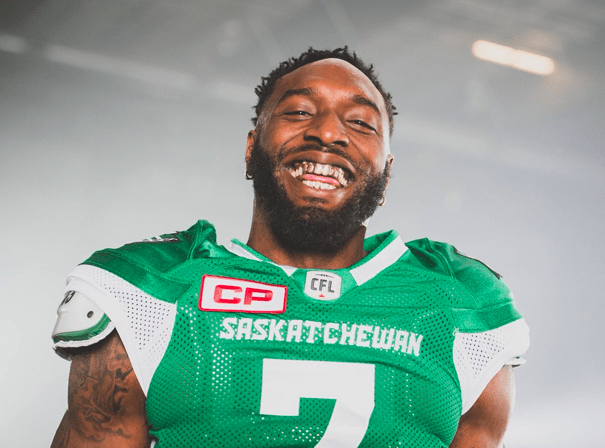