Haskell Garrett has a backstory like few other college footballers. In August 2020, just weeks before the start of his senior season, Garrett was shot in the face while trying to break up a fight. Incredibly, he was back on the field just two months later. Not only that but he also went to be awarded First-Team All-American honours by CBS. He has also received numerous other plaudits during his college career, including the 2021 Polynesian College Football Player of the Year Award. Having now completed his college tenure with appearances at the 2022 Rose Bowl and Senior Bowl, he is a major prospect for the 2022 NFL Draft.

Garrett was born in Burlington, Vermont, in May 1998 but attended high school in Nevada, becoming a valuable part of the school’s football team and earning a call-up to the 2017 U.S. Army All-American Bowl. He made his freshman debut for Ohio State’s team, the Buckeyes in the autumn of that year and went on to become a core part of the team, winning four Varsity letters and playing in four Big-Ten championship teams. After his awful injury in 2020, he made a stunning recovery to enjoy one of the best seasons of his career to date, showing the depth of his spirit and determination.

Because of the upheaval caused by the pandemic, Garrett decided to use his right to a “super-senior” college year, meaning he played five seasons for the Buckeyes and got to play in the Senior Bowl. He is now fully primed for the NFL. 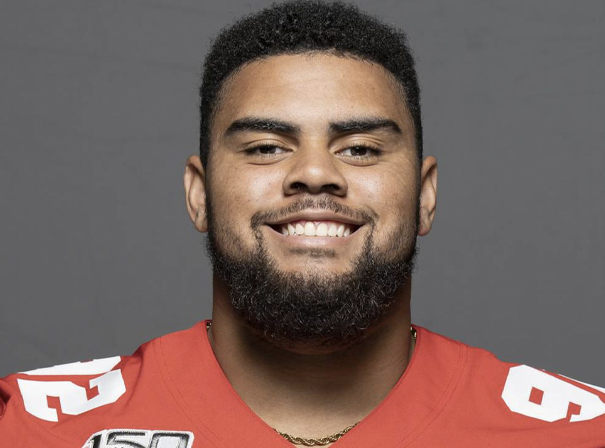