Zong Yuan Wang is a Chinese diver who has made waves in the international diving competition circuits, despite his relative newcomer status. At only eighteen years old, his latest Gold victory was in the men’s 3m springboard event at the 2019 FINA Diving Grand Prix in Gold Coast. His specialties are in the 1m and 3m springboard and the 3m synchronized diving events. Wang made his international debut at the 2018 FINA Diving Grand Prix in Rostock, winning Gold in the 3m synchronized diving event. That same year, he took home a gold medal at the World Junior Championships in the men’s 1m springboard event. In the past year, he attained three more gold medals at the FINA Diving World Series in London and the World Championships in South Korea in the 3m synchronized diving event and the 1m individual springboard event. Some of his notable diving partners have included Luxian Wu (together they’ve won one Gold and two Bronzes), Zijie Hu (together they’ve won one Gold). At the 2019 World Aquatics Campionships in Gwangju he won Gold in the 1m springboard event.

To date, he has not place less than 6th place in the international diving circuit. At such a young age, Wang has accomplished so much in his diving career. With a golden reputation, the world is sure to see him finish strongly at the 2020 Tokyo Olympics and find a place on the podium 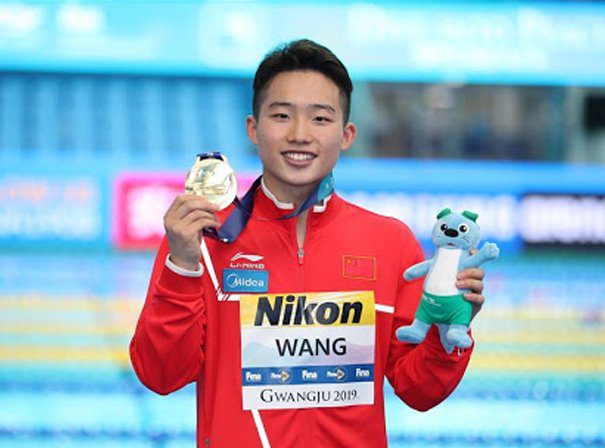