Former professional soccer player and one of the first African American women to turn pro in the sport, Briana Scurry is a living Soccer legend.

Scurry was selected to represent the US in Soccer in 1994, and went on to have a long and distinguished career. She helped the team to victory at the 1999 FIFA World Cup championship game, catapulting both herself and the team to fame and creating a buzz around women’s Soccer that hadn’t been seen in the US before. She inspired millions of young women to get involved with the game and over the next few years continued to put in stellar performances in competitions. Two gold medals at the Olympic Games, 173 international appearances for the US and the undeniable status of being one of the best female Soccerers of all time meant that Scurry was one of the first women to be selected for a paid professional league. She played with Atlanta Beat for nearly 10 years before a head injury sadly ended her career early. Since leaving the pitch, Scurry has gone to be an advocate for concussion awareness in sport, as well as inclusivity and diversity on the pitch as an African American LGBT+ player.

This icon has recently been inducted in the National Soccer Hall of Fame and is an in demand speaker at events, having testified to Congress about Traumatic Brain Injuries in sport. She continues to do pioneering work and has earned her place in the sporting history books. 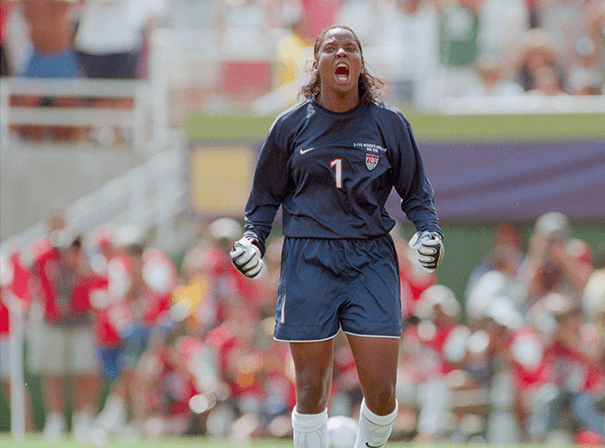