Former NHL star-turned-pundit Darren McCarty enjoyed great success during his twenty-year playing career. He won the Stanley Cup four times and was awarded the 1992 Jim Mahon Memorial Trophy for being the season’s highest-scoring right-winger. He also won the 2003 NHL Foundation Player of the Year Award. Since hanging up his stick, he has worked as a TV analyst, radio presenter, and podcast host — he even appeared in an episode of Hardcore Pawn. His eclectic podcast, The Grind Time with Darren McCarty has been broadcasting weekly since 2018.

McCarty was born in the Canadian city of Burnaby, British Columbia in 1972. His ice hockey career began in the late 1980s with the Belleville Bulls, a club in the Ontario Hockey League. During his four years with the club, he worked his way up to become team captain and, in his final season, scored 55 goals in 65 games. In the 1992 NHL Entry Draft, he was drafted by the Detroit Red Wings, winning the Central Division title in his first season with them. Over the following years, he and teammates Kris Draper and Kirk Maltby became infamous as “the Grind Line”, one of the NHL’s most feared forward lines. In 1998, McCarty scored the winning goal as the Red Wings won their first Stanley Cup since the 1950s (they would subsequently win it two more times over the next six years).

In 2005, McCarty moved to the Calgary Flames and then the Flint Generals before eventually returning for a final stint with the Detroit Red Wings, winning the Stanley Cup for a fourth and final time in 2008. 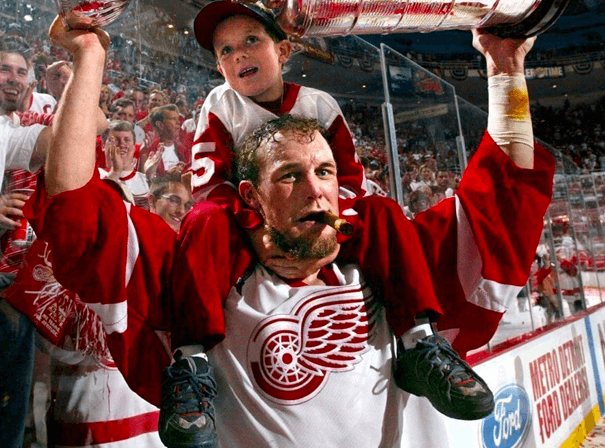